Tiger Island, midstream in the mighty Mekong River, is full of surprises. According to Giu, our Vietnamese guide, it gained its name centuries ago when two newlyweds discovered a bedraggled kitten. The kitten was floating forlornly on water hyacinths as the couple crossed the Mekong to set up home on a then-unpopulated island. The bedraggled moggie became a pet and as their children were born, it became obvious the couple had adopted a tiger.

Years passed. The couple died. The fully grown tiger took itself off into the jungle. But, Giu says, on the anniversary of their deaths, the tiger would return to pay respects. He explains this at what locals call “Mr Tiger’s temple”, a colourful, peaceful Buddhist pagoda, decorated, ironically, with the most fiercesomely-toothed member of the cat family.

Indochinese tigers were relatively common until after the Vietnam War, though they’re now virtually extinct.

Tiger Island has been barely visited by Western tourists despite it being just a short sampan ride from Long Xuyen, one of the Mekong’s largest towns. So that’s the reason why so many schoolkids and stallholders of Tiger Island seem genuinely happy to see us?

Most Mekong cruises aimed at Westerners start at My Tho (a 90-minute coach journey from Ho Chi Minh City) and travel through Cambodia’s capital, Phnom Penh. The cruises finish at Siem Reap, the stepping-off point for the heritage-listed temple complex Angkor Wat.

This means they travel the Tien, the northern distributary of the Mekong which accounts for some of the understandably bored looks you get from locals welcoming their third cruise of the week. We, however, travel on the Hau, the largest southern branch of the Mekong.

We’re on the maiden voyage of the Victoria Mekong, the first luxury ship specifically built to introduce Western travelers to this less-publicized portion of one of the most magical river systems on our planet. 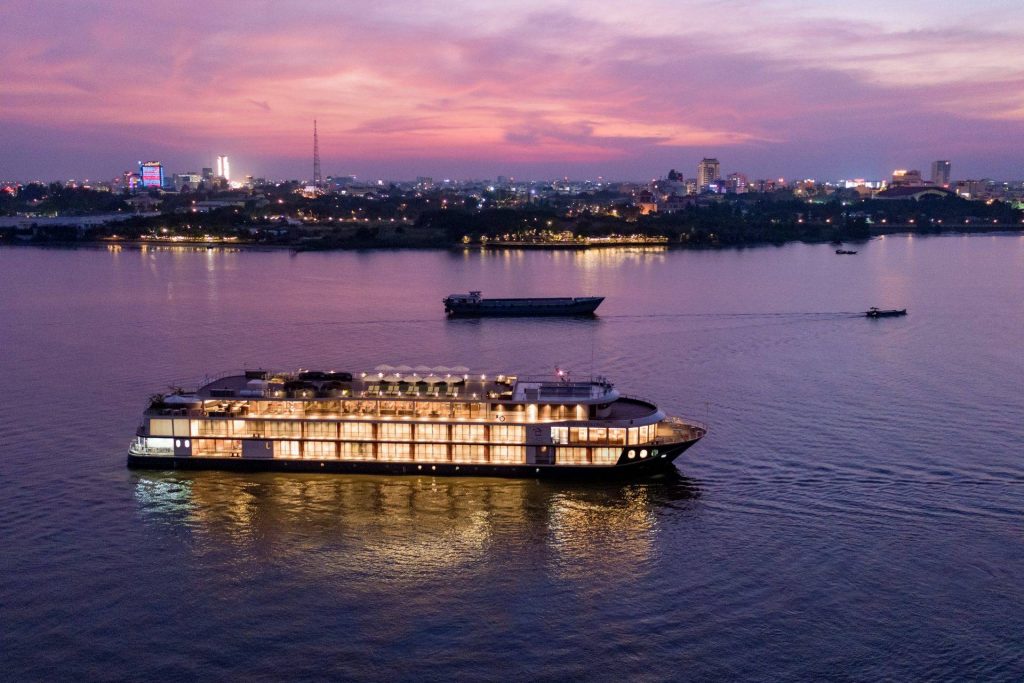 This is my third Mekong cruise, and they’ve all been enchanting. On every voyage you’re reminded this double handprint of a delta – eight fat fingers and one fat thumb reaching out to the South China Sea – began as tiny streams in the snowfields of the Himalayas, changing names as it flows through Tibet, China, Myanmar, Laos and Cambodia. 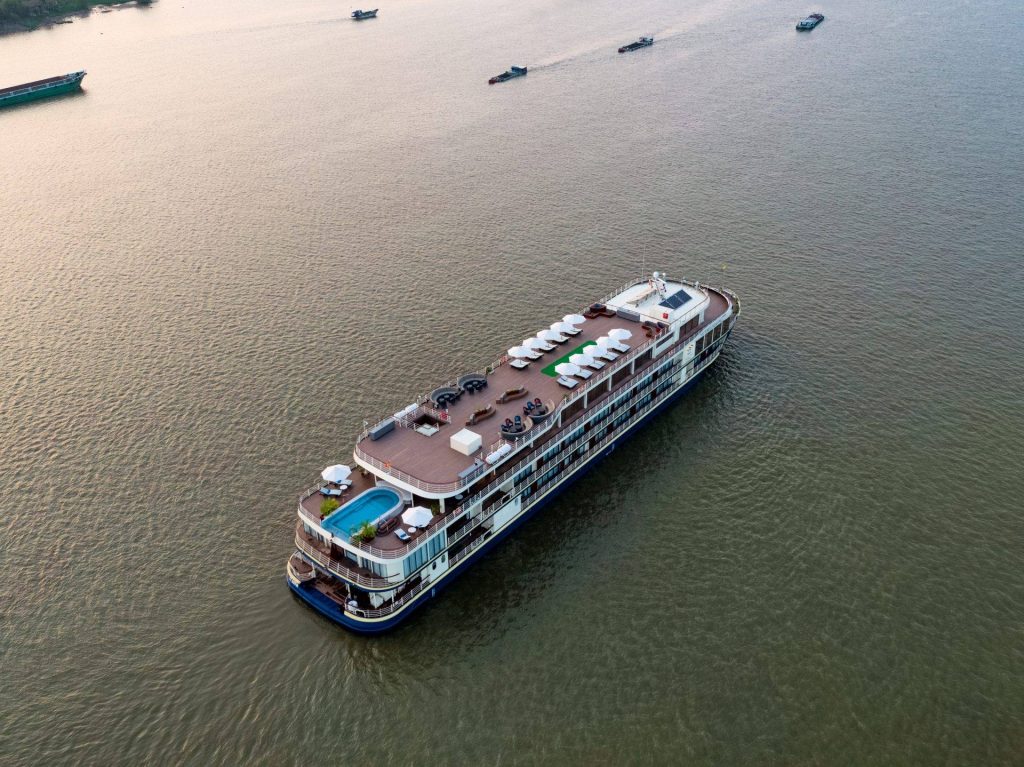 Here in the Vietnamese delta, the Mekong’s aquatic maze of natural waterways and man-made canals support a population almost the size of Australia’s. It’s a lifestyle – farmers and fishermen, floating markets and financially-adept Mekong spivs – that has endured despite invasion, colonization, and war.

The Victoria Mekong is owned jointly by Vietnam’s Thien Minh Group and Wendy Wu Tours, the first time the eponymous Chinese-born Australian travel entrepreneur has ever put her company’s money into designing and building a ship (most Mekong tour operators charter their cruise ships). 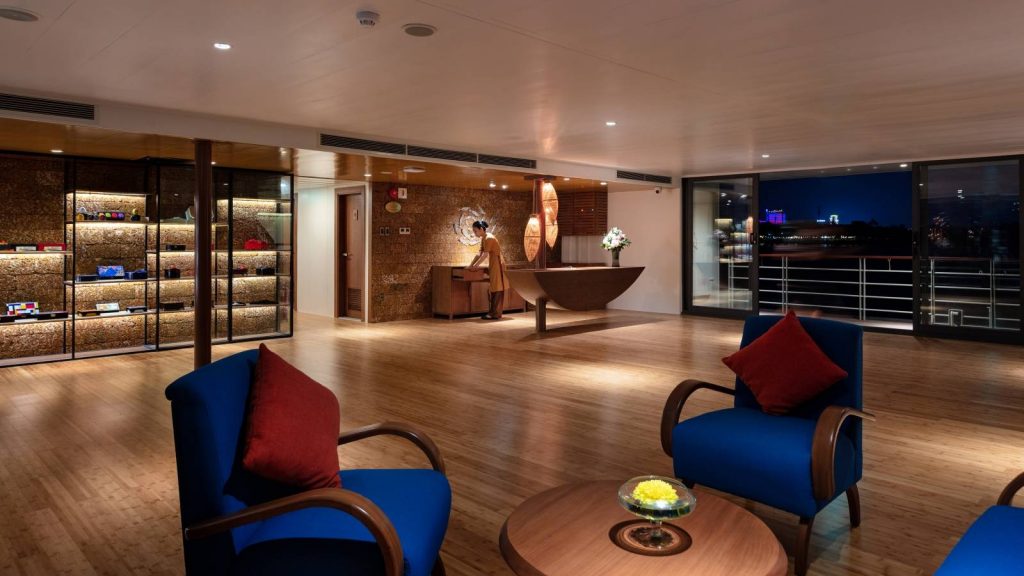 It’s a big investment of, at least, $2million (ship building costs are lower in Vietnam) the budget blown even higher by the Victoria Mekong’s impressive green credentials. Solar panels provide 20 per cent of the ship’s electricity needs. Its recycling system returns purified water to the Mekong. And no disposable plastic is allowed on board. The Mekong is one of the six worst rivers in the world for delivering plastic waste into our oceans.

Not that the Victoria Mekong is puritan. Far from it. As a boutique ship, catering for 70 passengers spread over 35 cabins, the Victoria Mekong has one of the highest staff to passenger ratios on the river despite being listed (and priced) as a “four-star” cruise to lower expectations. It is, apparently, the first on the Mekong to have its own proper cinema showing 119 movies including Vietnamese and French classics about Indochina.

There’s a traditional running or walking track, a gym, a pool with jacuzzi, a huge sun deck, cocktail-making competitions, fabulous spa treatments and nightly local cultural events involving a plethora of musicians and dancers from the regions we pass through. 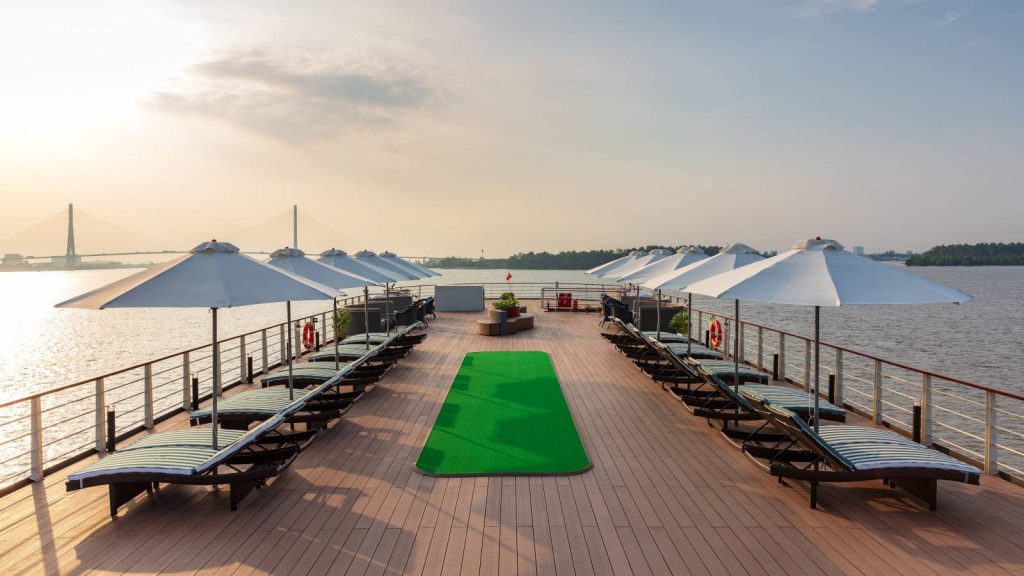 And did I mention the cuisine? A classic combination of European and Vietnamese, my favourite dinner was Manchao soup followed by steamed sea bass with ginger, with a mango crepe with chocolate sauce for dessert.

You could experience the Mekong without ever leaving the ship. Every ample airconditioned cabin has a balcony and I spend much of my four-day voyage from Can Tho to Phnom Penh – when I am not enjoying shore excursions – relaxing on said balcony, just watching the extraordinary river life flow by.

Are Victoria Mekong’s deliberately short itineraries with four nights upstream to Phnom Penh, three nights downstream to Can Tho a decent introduction to the extraordinary Mekong delta? A luxury introduction, yes, but designed to leave you wanting more. That’s the rationale.

Most Mekong cruises, from the delta to Siam Riep, take at least 10 days which suit the time-rich – mainly retirees. But younger, still-employed travelers don’t necessarily crave to spend their entire annual two-week holiday on a single cruise but would prefer to combine a Mekong cruise with visiting other parts of Vietnam, Cambodia or Laos.

The Victoria Mekong is not the only luxury Mekong cruise ship addressing this younger, equally affluent but more time-poor guest. But it is the first specifically built to show this “less traveled” part of the delta. The Hau is hardly unexplored, it is a hustling hive of life. But it’s true we don’t see another cruise ship until we queue to cross the Cambodian border.

The onland excursions are key, given this cruise is shorter than usual. But much of the adventure is spent experiencing the river from the ship.

The Mekong may “only” be the 12th longest river in the world, and for this entire lower stretch it’s the color of mushroom soup, sprinkled with the greenery of those floating water hyacinth beloved by drowning tiger cubs.

However every hour you’ll discover something new and it helps the onboard Wi-Fi is both free and excellent so you can check whether that temple is Taoist or Buddhist.